City Manager Rob Hernandez will be out of a job by August (at the latest) after the Cape Coral City Council voted 5 to 3 not to renew his contract for another year.  City Manager Hernandez, who is reaching his third year in office, was not present for his own shellacking due to a conveniently scheduled surgery.

The discussion was held in a conference room before the February 1st City Council Meeting.  The meeting was not video recorded like other regular meetings. Luckily this Watchdog was able to livestream the meeting … unfortunately, with poor audio and video quality.

Councilmembers Tom Hayden, Bobby Welsh, and Jessica Cosden were the lone supporters of the City Manager.  Both Councilmen Welsh and Hayden cited his somewhat positive performance review, and Councilmembers Welsh and Cosden both cited the need to hire a new City Attorney and Fire Chief soon as reasons for their opposition.  Councilwoman Cosden, who had rows with the City Manager over Del Prado & De Navarre, felt that one concern was not justification for ending his contract.

On the performance review, it should be noted that the review was conducted by the previous City Council, of which two members have since been replaced in the November election. One new council member, Patty Cummings, had a vastly different opinion than her predecessor (Jennifer Nelson.)  In addition, even with that different Council, the City Manager’s average review score was 3.4 out of 5, or just slightly above average.

That last point was hit on by both Mayor John Gunter and District 6 Councilman Keith Long, both of whom asked whether we wanted to be an “average city or an exceptional city?”  Mayor John Gunter had some areas where he believed the City Manager did poorly and others, like economic development, where he excelled.  But, he concluded that an average City Manager was not good enough for Cape Coral.

“Everything that I’ve tried to do in life has always been exceptional,” said Mayor Gunter, which sounds like an arrogant statement, but he clearly meant that he has tried to be exceptional in everything he does.

Mayor Gunter continued.  “Have I failed sometimes?  Absolutely.  But I always strive to be exceptional.  I try to give 110%.  I can honestly say the five years that I’ve had the honor to serve our community, I thought I would get more accomplished than I thought.  When I look at our current City Manager’s record, I see an average individual.  For me, you have to ask yourself, is that the type of person you are looking for, or are you looking for exceptional?”

“I’m a firm believer that he works for us,” said Mayor Gunter.  “We are accountable to the residents of this city.  Now there have been points and times, several of them actually, where it seems that he had an agenda himself to get from Point A to Point B.  I don’t agree with that.  Is the tail wagging the dog or is the dog wagging the tail?  And in many cases, I think the tail tries to wag the dog.”

District 2 Councilman Dan Sheppard had a long list of grievances for the City Manager, ranging from pathological lying to low morale with city workers.

“How can we as a team succeed when we’re misled, we’re lied to, we’re not given proper information?” asked Councilman Sheppard.

But perhaps the most damning of his reasons was the revelation that the City did not use dozens of electronic billboards to inform the public during Hurricane Ian.

For those that may have blocked the trauma from their brains already, after Hurricane Ian hit, many residents had no access to power, and even more, had no access to the Internet.  During those first few days, residents could only rely on analog information sources.

Yet the City Government continued to publish online videos and updates as if that was the best way to keep residents informed.  Councilman Sheppard claimed to have later discovered “hundreds of electronic billboards sitting there that we never used” at Lake Kennedy, which he felt was justification enough not to renew the City Manager’s contract.

“Rob told me it was not possible to billboard all across the city and he refused to do it,” said Councilman Sheppard.  “We refused to communicate with the citizens of our city in the most horrible disaster most of us ever witnessed in our life.  To me, that is one reason and the sole reason why this man should go.”

District 4 Councilwoman Patty Cummings said the City Manager has lied to her as well, but the final straw for her was his failure to secure federal and state funding for the Utilities Expansion Project.  This failure is why residents in the North 1 UEP will be assessed more than $35,000 per lot, which could leave families in the area with a six-figure debt to the city.

“What really got me was the UEP,” said Councilwoman Cummings.  “I represent District 4, but I represent the City of Cape Coral and if I have to help Keith Long and I have to help Jessica Cosden to save some citizens and those residents, then that’s what I’m going to do.”

Councilwoman Cummings then proceeded with a passionate plea to the people populated proximal to her physical position about the problems persisting with the price for the UEP.  (This example of alliteration is brought to us by the letter P.)

“The UEP is a very serious matter,” said Councilwoman Cummings.

“If you guys think that the perfect City Manager is out there, you’re living in a different world,” said Councilman Hayden.  “A little history…Terry Stewart, same thing.  John Szerlag, same thing.  Two or three City Managers before that, same thing.  Council changes out, they’re disgruntled, they’re upset, they present inaccurate information…boom, all of a sudden the City Manager’s out and we’re searching again because we think we have a better person out there.”

(It should be noted that Szerlag allegedly committed tax fraud with city revenues and Stewart resigned because he did not like the new Mayor.)

Councilman Hayden accused his colleagues of pursuing personal agendas and implied that Councilman Sheppard’s “hundreds of electronic billboard” was a lie or at least exaggerated.

“Of course it’s personal, these are your personal agendas,” said Councilman Hayden.  “We’ve got to be real careful.  Defamation of a person’s character, mentioned many times today.  The man had his evaluation last year.”

District 1 Councilman Bill Steinke was the only neutral Councilmember, saying that he did not have enough information to make an honest assessment, but noted that during the campaign, residents asked him to fire the City Manager. He also stated that he was hearing many of the allegations about the city manager (from Councilmembers Long, Sheppard, and Cummings) for the first time due to Sunshine Law restrictions.

Unfortunately, this was not something that could be kicked down the road.  The City Council had until February 11th to provide Rob Hernandez the necessary six-month window that his contract would not be renewed; otherwise, it would renew automatically per the contract stipulations.

Councilman Long asked Councilman Steinke to think about why residents would ask him to fire the City Manager and to note the concerns of himself and his colleagues in his decision-making process.

Councilman Steinke reluctantly ended up being the deciding vote not to renew. 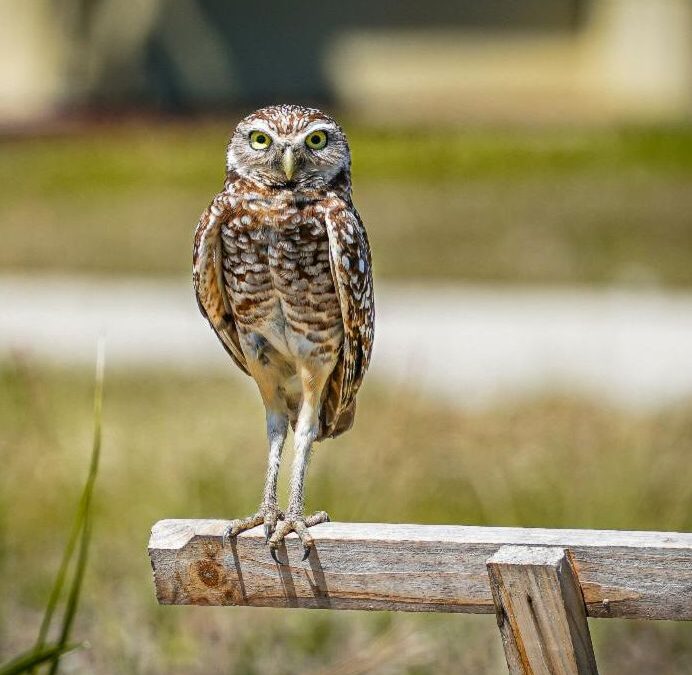 The event will be held at 10 a.m. on Thursday, February 2, at Pelican Baseball Complex, 4128 Pelican Boulevard. Ground Owl Day pays homage to the burrowing owl and, just like the groundhog in Punxsutawney, PA, each year, we look to the owl for guidance on what kind of weather to expect in the next six weeks.

“This event is our way of localizing the classic Groundhog Day and making it our own,” said CCFW Ground Owl Day Event Coordinator Pascha Donaldson. “It’s also an excellent opportunity to spread awareness and provide education on Cape Coral’s burrowing owls.”

This year’s event will feature Mayor John Gunter reading the Ground Owl Day Proclamation and NBC2 Meteorologist Rob Dunns as the Master of Ceremonies. The event will conclude with a determination of whether Southwest Florida’s “winter weather” will continue for another six weeks or end sooner. The Chiquita Landscape project started this week in SW Cape and will focus on enhancing the streetscape design for the local neighborhood on Chiquita Blvd from SW 49th Street to SW 54th Terrace.

The newly enhanced landscape design will improve tree canopy coverage throughout the corridor and benefit the environment while elevating neighborhood aesthetics. 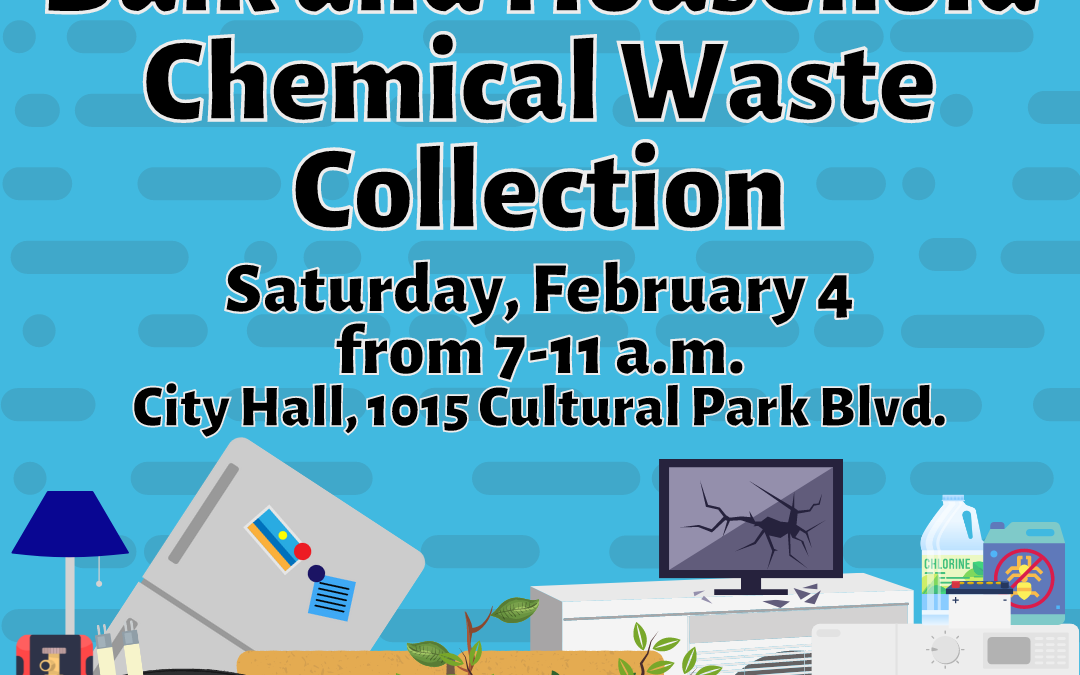 This quarterly event is another way for residents to dispose of bulk and household chemical waste safely and responsibly. Residents should use the main entrance to City Hall on Cultural Park Blvd. to drop off items. Materials will be collected from vehicle trunks and truck beds.

Proof of residency may be required to drop off items. Photo IDs with a Cape Coral address and utility bills from an active Cape Coral account are acceptable items to prove your residency. Items accepted at the event include: Bikers participating in the Tour de Cape will be utilizing roadways across Cape Coral (marked in yellow on the map) on Sunday, January 22, from 8 a.m. to 3 p.m. Motorists are urged to use caution and be aware of bicyclists. Many common types of permits are issued immediately online.

Apply for and receive your permit immediately by visiting www.CapeCoral.gov/energov.

If you need assistance submitting an application through EnerGov, visit our EnerGov Citizens Self-Service kiosk at the south end of the Permitting Counter.