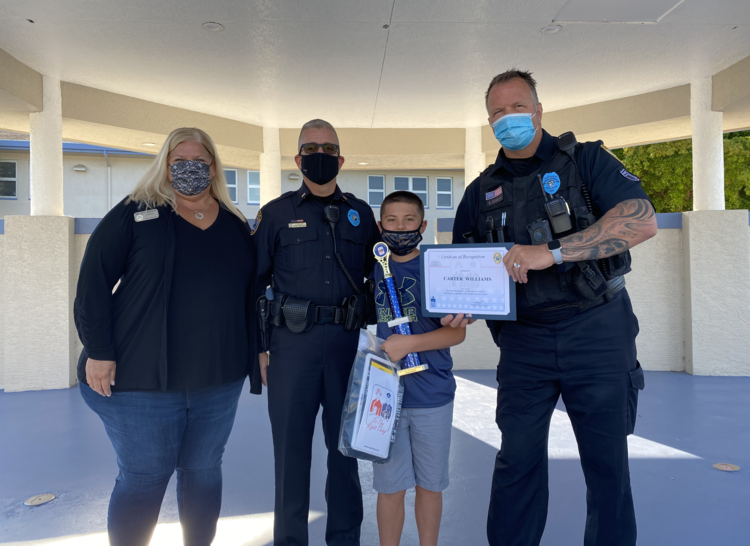 The Do The Right Thing Program recognizes students who have done the “Right Thing”.

Carter Williams is a fourth grade student at Cape Elementary School. He created a lemonade stand with the goal of donating the money he raised to the Cape Coral Animal Shelter. Carter raised $110.00 and his family donated $100.00.

It is for Carter’s generosity and selflessness, he is being awarded the Do The Right Thing Award. 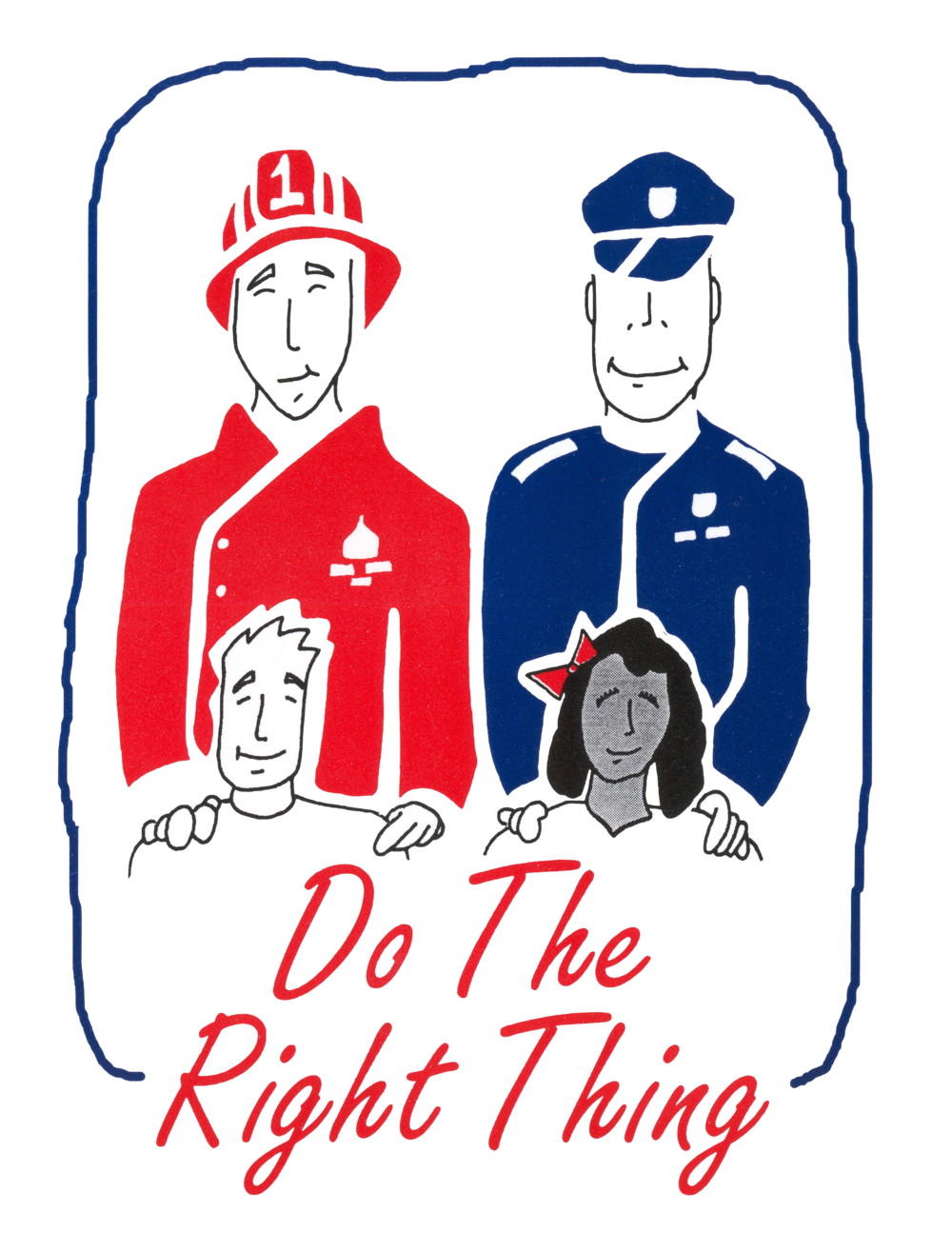 Cape Coral Police Department’s monthly “Do The Right Thing” ceremony February 2020 will be held Wednesday, February 19th, 2020, at 2:00 pm in City Council Chambers, located at 1015 Cultural Park Boulevard. This ceremony is open to the public and we encourage our community to come out and show their support to these outstanding young men and women who “did the right thing.”

Firefighters responded to a call for a broken water pipe at an 86 year old woman’s home. When they arrived, they found 2-3 inches of standing water throughout the entire house and Kelsey assisting the woman. Kelsey then used a shop vacuum to assist with the water cleanup and stayed to continue helping even after the firefighters left.

Charles, a student volunteer of Pine Island Leaders of Tomorrow (PILOT), was participating in the Kiwanis Junior Olympics. He noticed one particular student came to cheer for his friends even though he had recently broken his leg. Charles decided that after his race he would push the student in the wheelchair around the ¼ mile track to give him the experience of participating.

After school, one of the students was being wheeled to the bus by a student volunteer and his nurse. The nurse noticed his face was red and checked his which had fallen out.  and Marianne happened to be walking down the hall and asked if they could help.  Khloee went to the teachers and asked them to hold their students in the classrooms until the nurse was able to get the situation under control while Marianne went to get another nurse to help. Thanks to Khloee and Marianne, a very serious incident was able to be taken care of in a quick and calm manner.

Do The Right Thing Ceremony for November

This ceremony is open to the public each month. The community is encouraged to come out and show their support to these outstanding young men and women who “did the right thing.”

Do The Right Thing October Winners:

Macy has a very kind and compassionate heart.  Last year, she witnessed a student being bullied and stood up for that child.  After that, Macy formed an anti-bullying group at school.  Recently, Macy faced a daunting situation.  A friend shared with her that she was going to take her own life.  Macy was very upset and worried about her friend.  She decided to get help from the faculty at her school to insure the student got the help she needed.  The faculty and administration at Gulf Elementary was very efficient and made sure it was handled in the correct manner.

Taylor wanted to give back to her community.  She heard that foster children were in need of pajamas.  Taylor made it her personal goal to gather 100 pairs of pajamas for these children to give to the “Donate4kidz Foundation.”  Thus far, she has collected 112 pajamas.

Alyssa is a member of the Youth Leadership Committee at the local “Make A Wish” branch.  She made Gulf Middle School aware of a “Make a Wish” fundraising effort taking place locally.  Alyssa actively advertised, spoke on behalf of the organization, and rallied her peers to join in supporting wish granting for seriously ill children.

For her 10th birthday, Selena organized a birthday party at the Fort Myers Skatium.  Instead of presents, Selena asked for her party to be a fund raiser to the tune of $10,000 in order to donate the money to the Ft. Myers PD Fallen Officer Memorial Foundation.

Wyatt is a third-grade student who participates in 5k races around Lee County and usually places 1st, 2nd or 3rd in his age group.  In early October, Trafalgar Elementary had their annual “Monster Mash Dash” which is a one-mile race.  Wyatt felt that it was more important to run with a friend, who had not been feeling well, than it was to win a trophy.  His teacher, Mrs. Blanco, said that in her 25 years of teaching, she has rarely met a child who will give up their long-term goal to be a good friend.

During lunchtime at school, Jacklyn and Zoe noticed a student sitting by himself.  These two young ladies took time away from their lunch to go and sit with him to make sure he had someone to talk to and was not bullied.  They were genuine in their approach and he lights up when they join him for lunch each day.

Jayson was an aide for Caloosa Middle during the 1st quarter of the school year. He was a very positive influence on all who he came into contact with.  Although Jayson is no longer an aide, he continues to tutor and assist others having struggles with their school work.  He’s shown that he cares for his peers and exhibits a maturity level beyond his age. 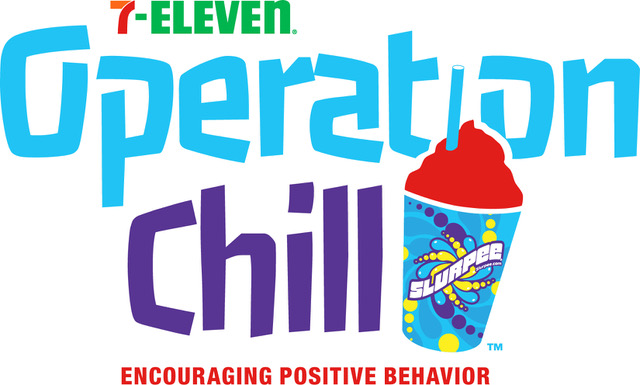 This summer, Cape Coral police officers will be dispensing well-deserved Slurpee® justice to good kids around Cape Coral. For the 23rd year, 7-Eleven® is working with local police and sheriff’s departments to distribute free Slurpee® drink coupons to children and youth through its popular Operation Chill® community-service program.

During 2018, 7-Eleven will issue up to 1.4 million Slurpee coupons to almost 1,100 law enforcement agencies, most during the summer months and back-to-school season. Big-city departments and small-town forces alike use the Slurpee coupons to enhance relationships with the young people in their cities by rewarding them for good deeds, constructive activities, and acts of kindness.

Appropriate “offenses” might include helping another person, deterring crime or participating in a community or police-sponsored event. Although the reasons for being “ticketed” are varied, the end result is the same for every youngster: a free Slurpee drink and a smile for being a good kid. Each coupon can be redeemed for a small Slurpee drink at participating 7-Eleven stores.

Begun in Philadelphia to give law enforcement officers a positive reason to interact with children and teens, Operation Chill has expanded to cities across the country. Since the program’s inception in 1995, almost 21 million Operation Chill coupons have been distributed to hundreds of law enforcement agencies across the country in areas where 7-Eleven operates stores.

“Officers are always looking for ways to have positive interactions with our citizens, especially the kids. Being able to reward good behavior and put a smile on a child’s face (along with a cold Slurpee on a hot day) is definitely a highlight of an officer’s shift.” Cpl. Phil Mullen, CCPD Public Affairs.

“Year after year, Operation Chill is our most popular community service program. Kids love Slurpee drinks, and police officers love having a reason to approach kids and surprise them with a Slurpee coupon as a reward for doing something good. And we, at 7-Eleven, love helping them make those important connections in the community.” Mark Stinde, 7-Eleven Vice President of Asset Protection.

This ceremony is always open to the public and the community is encouraged to come out and show their support to these outstanding young men and women who “did the right thing.” The guest speaker was Lori Feige, Director of Programs for the Children’s Network of Southwest Florida.

Evan saw a kindergartener that had fallen on the playground and hurt himself, and was screaming at the sight of blood. Evan got the child’s bag and walked the child to the office. Every time the child saw the blood he would begin to scream. Evan continuously reassured the boy that he was going to be fine and that he was being very brave. Evan remained with the child in the office, putting on a puppet show to distract him. Evan was instrumental in calming him down and keeping him settled until the mother arrived.

Kylee noticed a student who was normally always drawing in a sketchbook but did not appear to have one anymore. Kylee bought her a new one and gave it to her anonymously. The student usually sits alone at lunch and Kylee will often ask the student to sit with her. Kylee is always thinking of others above herself.

Uriah did not want to see anyone left out on Valentine’s Day, so he saved his money and purchased a rose for every 6th-grade girl in the school, as well as the female teachers. This brought tears to the eyes of many recipients and showed a student who puts the feelings of others ahead of his own.

Zoey wanted to help her community so she decided that she would work in a food pantry. Zoey was willing to give up Christmas Eve and Christmas morning to pack food for “Meals of Hope.” She continues to be involved in her community.

Carlee feels that the best way to share her love of sports is to give other students the opportunity to have access to the costly equipment needed to play sports. Through her charity, “Have a Ball”, Carlee has received donations from residents, local businesses, and teachers and students at Mariner Middle School. Her efforts have continued to grow and she now is receiving donations from the Miami Heat basketball team. To date, Carlee has raised well over one thousand dollars and touched the lives of numerous local children.

Alyssa struggled academically and socially in 6th and 7th grade. As an 8th grader, she has worked hard to find personal and academic success. She is a student leader, has straight A’s and serves as a peer mentor. Earlier this year, she was asked by the principal to speak to the 5th graders who attended the open house, to share her struggles and successes.

On Thursday, February 15th Chris brought to the administration’s attention a threat to his brother’s school. Chris’ action to speak up when he learned of a potential danger potentially saved lives.

Mitchell found a credit card on the side of the road. He took it upon himself to do a Google search of the name on the card and took it to the address listed for the teacher.

Congratulations to all the kids who did the right thing.  They are all Cape Kids with Style!!!