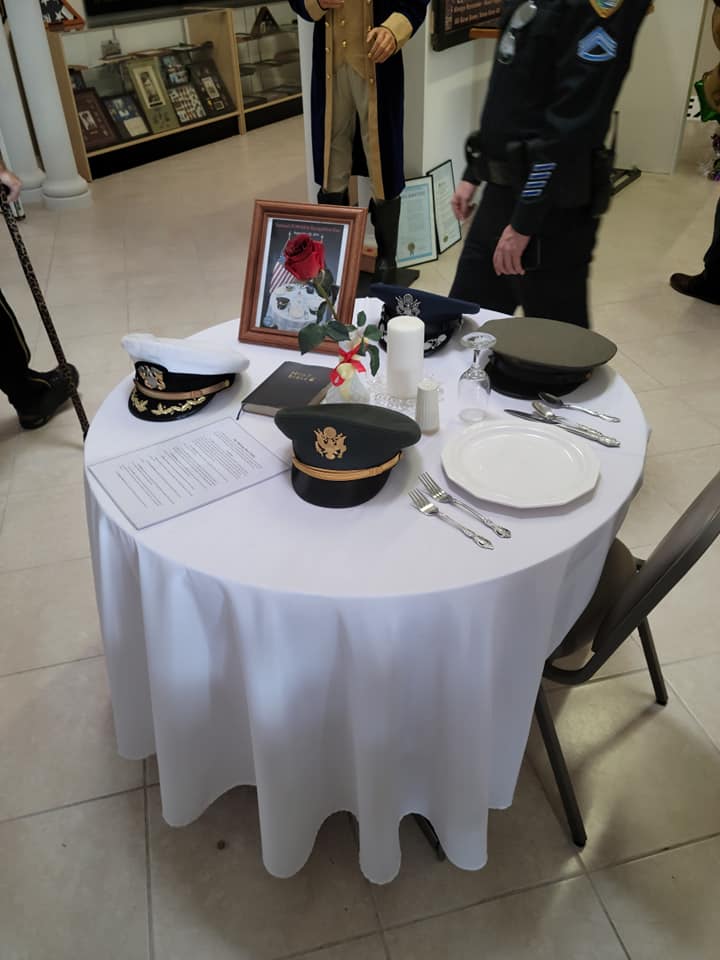 Walking through the new military museum in Cape Coral means taking a trip back in time.

On Tuesday, the Brotherhood of Heroes Military Museum and Resource Center officially opened its to serve veterans. From the Revolutionary War on, each exhibit tells a story, some with a Southwest Florida connection.

The museum in the “Purple Heart City” will not only house military treasures but also welcomes veterans’ groups like The Purple Heart and the Disabled American Veterans.

Admission is $4 and free for military personnel and first responders.

Photos courtesy of B Pat O’Rourke 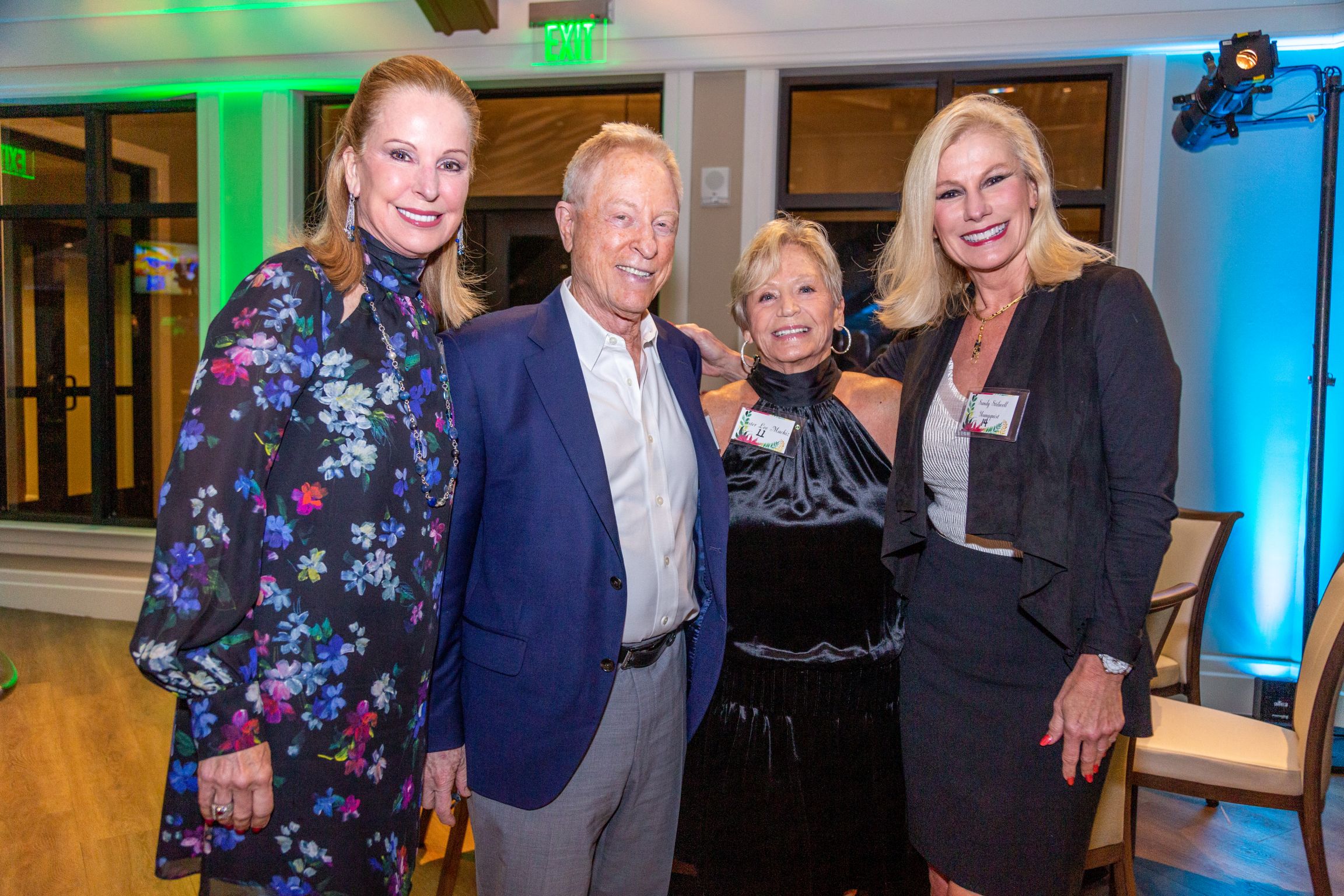 established the nonprofit in 2008, and one year later, SWFL Children’s Charities, Inc. $10 million to build a new children’s hospital in Southwest Florida. By 2012, they were ranked by Wine Spectator as the third most successful wine festival in the country. Since its inception, it has generously donated more than $19 million to Golisano Children’s Hospital of Southwest Florida, making it the second-largest donor behind the hospital’s namesake, Tom Golisano.

“I was honored to be in a position to bring the Southwest Florida Wine & Food Fest to life with the support of so many caring and generous people,” shared Dr. Steve Machiz.

“By being strategic and thinking big, we have proven that when we work together for the community good, we can accomplish anything. There is no greater joy than to see the Children’s Hospital standing tall and proud on the campus of HealthPark.”

The Frank Haskell Humanitarian Award recognizes outstanding leadership in the advancement of quality health care for the citizens of Southwest Florida.

The award is named in honor of Frank Haskell, co-founder, with his late wife Betty, of Barbara’s Friends – Golisano Children’s Hospital Cancer Fund, which was named in memory of their daughter Barbara after cancer claimed her life when she was far too young. For more than 25 years, Frank has worked tirelessly to help local children win their battles with cancer and life-threatening blood disorders.

At age 90 he is not done yet, raising more than $20 million to date and counting. Previous recipients of the award have included Al Kinkle, Joe , Jim Nathan and Amanda Cross.

The prestigious award was presented at Lee Health Foundation’s annual Evening of Gratitude, held Nov. 20 at The Forest Country Club. The formal event thanked more than 350 donors and supporters in attendance for their generosity and unwavering commitment to enhancing health care services within the Lee Health network.

Also in attendance to address the audience was Kelli Parlavecchio, a patient of Lee Health’s Regional Cancer Center and beneficiary of the Sharon MacDonald Breast Health Fund.

Sharon MacDonald was present at the event who shared an embracing moment after Parlavecchio shared her story of gratitude. Fifteen-year-old Summer Kates, who was hit by a car in 2015, also shared her story of gratitude. Kates runs her own nonprofit, Summer’s Cookies, to benefit the Child Life program at Golisano Children’s Hospital of Southwest Florida. 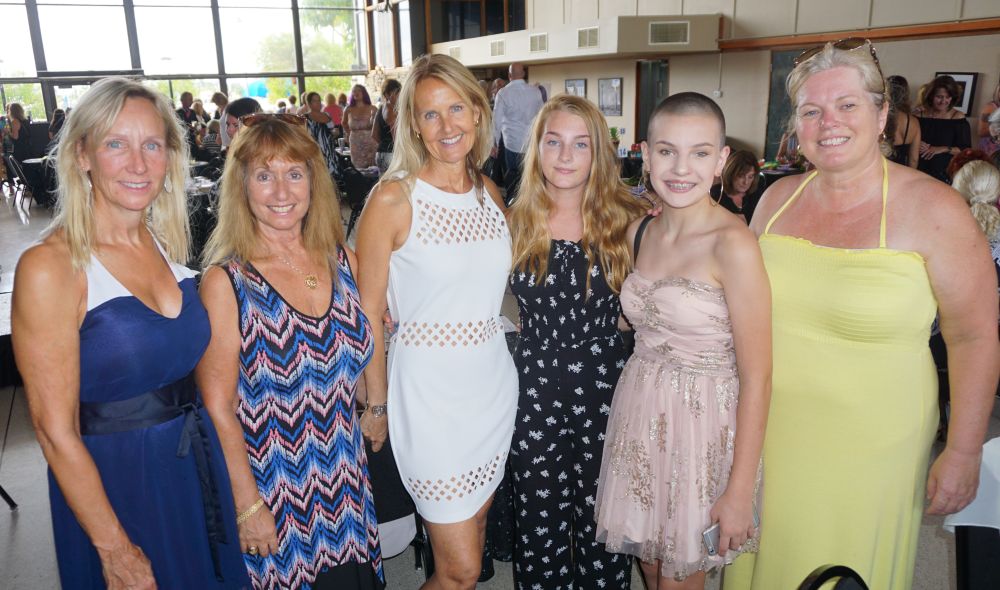 The event was hosted by IBERIABANK and presented by the Gunterberg Charitable Foundation at the Cape Coral Yacht Club.

It featured a fashion show of one-of-a-kind recycled or repurposed pieces created by individuals and businesses and “ready to wear” looks from Razzle Dazzle, as well as food, signature cocktails, music, and a raffle drawing. More than 190 dresses were collected during the gathering to be sold at deeply discounted prices during Pace’s 11th annual Love That Dress! event on Aug. 21.

All proceeds benefit Pace Center for Girls, Lee County, which provides academic programs and counseling services to girls and young women ages 11 to 18. 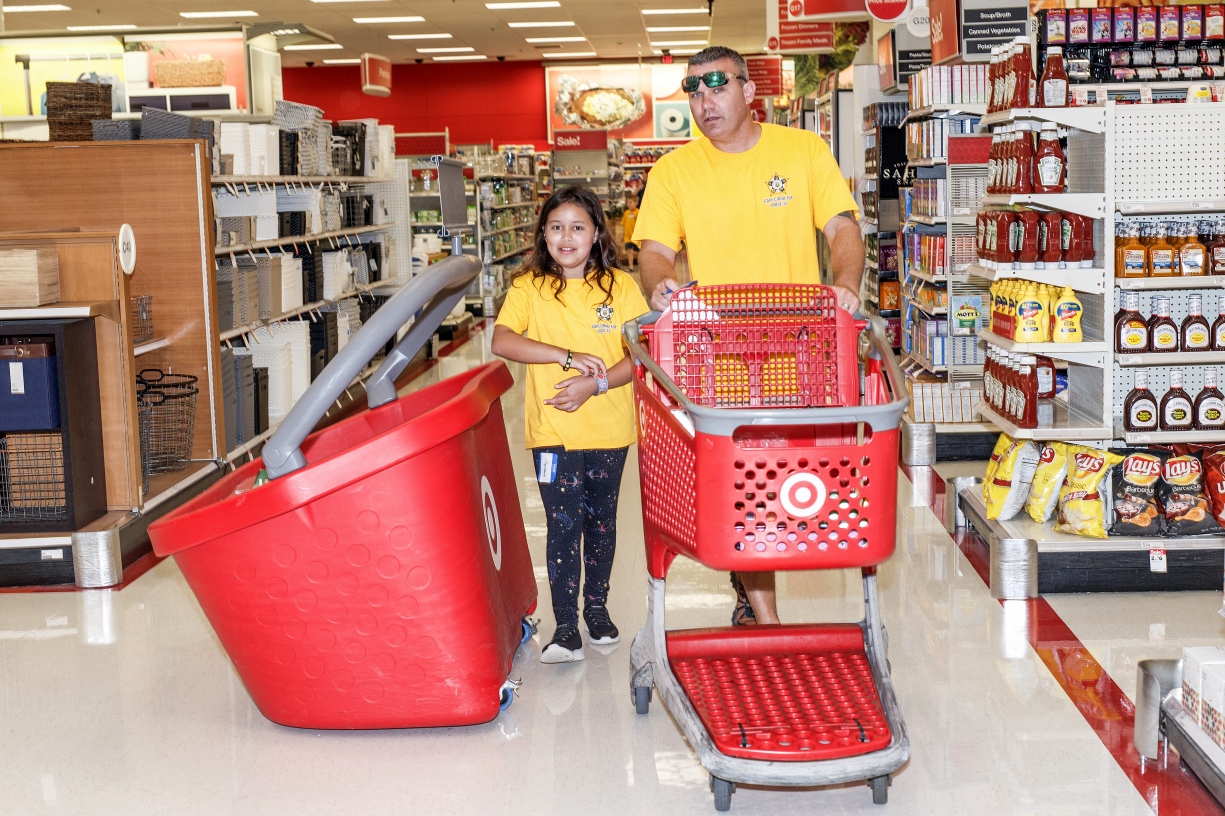 The event, held on August 3rd, allows officers to spend positive one-on-one time with Cape Coral children whose families are experiencing financial struggles and cannot afford to purchase needed school supplies and clothing. This is the first annual event held by the organization which represents active and retired men and women of the Cape Coral Police Department.

For school children of all ages, the program provides participating students with a gift card to Target. Students meet police escorts at the store where they can purchase supplies and other necessities. The program reinforces the ideas of sharing and giving and promotes the idea that role models of all ages are crucial to the development of our youth.

“The success of this event was made possible by the generosity of our citizens,” said Officer Paul Blanchard. “Beyond providing school supplies, the program allows local law enforcement to get to know the community we serve and protect on a daily basis. We are grateful for the support we received and are now working on our annual Christmas shopping trip with the children.” 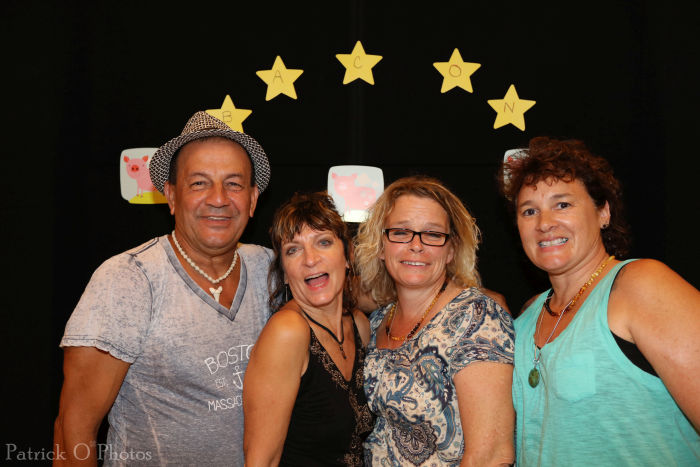 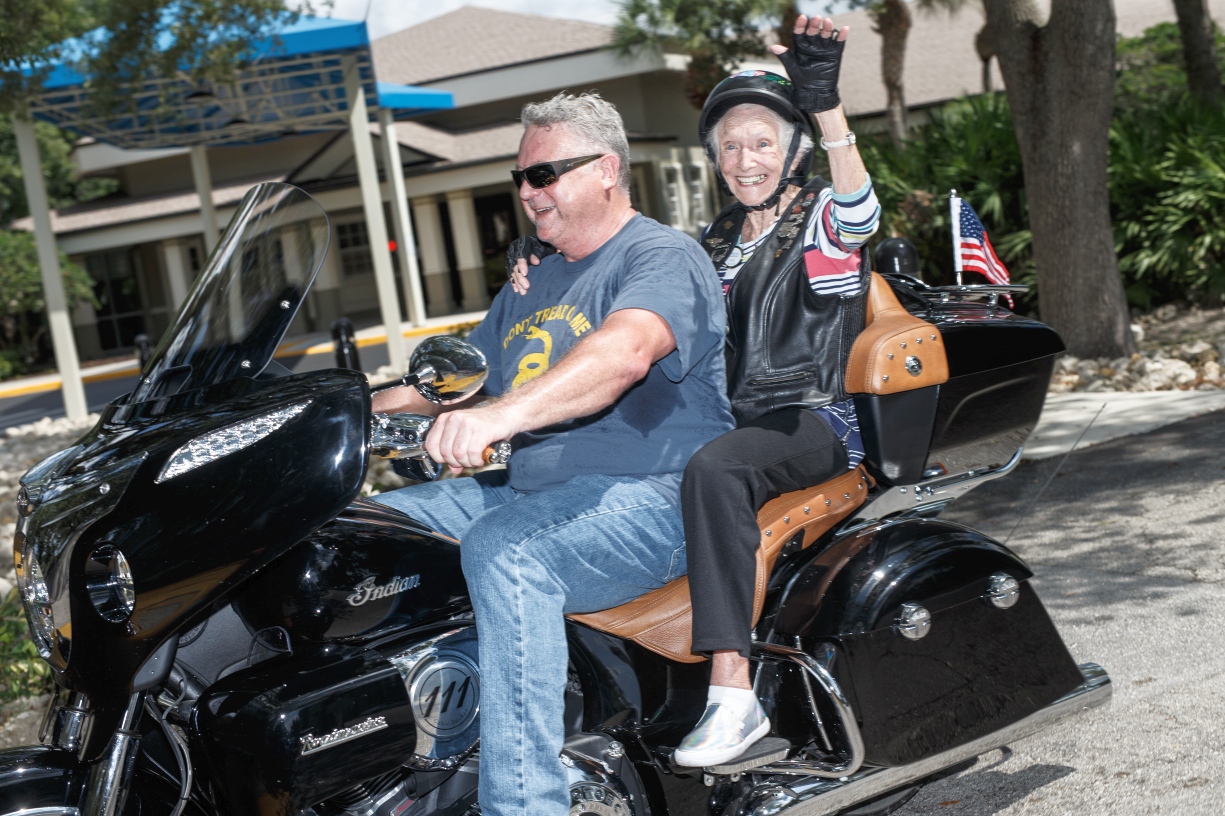 Get your Motor Running!

For many years, 92-year-old Frances Keogh has wanted to take a ride on the back of a motorcycle. Thanks to a special surprise coordinated by her close friends, Frances can finally check this experience off her bucket list.

Frances’ face lit up when she exited her building and saw a crowd waiting to greet her with hugs, laughter and motorcycle gear in tow.

“I just about blacked out to tell you the truth, I was so excited!” Frances said about the surprise of seeing her friends and family gathered to share this bucket list experience with her.

She quickly donned a helmet, leather vest, and riding gloves and was ready to hit the road.

Frances’ bucket list ride was made possible by close friends, Sheila Sweeney and Joyce Easton, who connected with local motorcycle enthusiast, Dr. Michael Dreikorn, for his help to make it happen. Upon hearing of their plans, Michael readily agreed to take Frances out on his Indian motorcycle.

“Oh, it’s amazing,” Sheila and Joyce responded in unison when asked how it felt to make this dream come true for Frances.

After a ride around the Cape Coral community, Frances rolled in on the back of Michael’s motorcycle with a big grin on her face, waving at her friends and family as they cheered for her return.

Frances enjoyed an intimate cake reception with her friends and family at Gulf Coast Village, capping off the day by dancing to her favorite song, “Mustang Sally.”

“The stories she tells are endless, and her dancing, her love of ‘Mustang Sally’ and her signature move is amazing,” Sheila said. “She has such a zest for life and a love of God, it’s just inspiring.”

Originally from Piedmont, North Carolina, Frances moved to Southwest Florida in 1995. She is a poet, author, and political enthusiast. She has been a resident of Gulf Coast Village for nearly a year, where she enjoys being involved in the community, spending time with her family and friends, reading poetry, staying active, and dancing.

“She is just an inspiration at 92 years old to be as energetic and so positive,” Joyce said.

Among many other achievements, Frances was nominated “Woman of the Year” by the American Business Women’s Association in 1974, received both the “Golden Poet Award” and “Silver Poet Award” by World of Poetry in 1985 and 1986 for her book God’s Spotlight, and recently was awarded the “Women of Distinction Lifetime of Leadership Award” by the Republican Women of Cape Coral Federated.

A few years ago, Frances checked zip lining off her bucket list, but her aspirations don’t stop there. Next on the list for this adventurous 92-year-old? Frances hopes to try skydiving.

“I’ve always wanted to drop out of a plane,” Frances said.

“I’m a happy camper! I’m ready to do just about anything,” she added.

Photos by Alma B. Photography