In 1927, Oswald the Lucky Rabbit appeared in the very first Oswald cartoon. In 1932, Bugs Bunny was introduced to Warner Brothers. In 1942, Bambi made a friend named Thumper. In 1951, Alice chased a late rabbit down a hole. In 1988, Roger Rabbit was shared with moviegoers worldwide and in 1999, Neo followed the white rabbit.

Bunnies are cute, fluffy, cotton ball, stuffed-toy looking animals complete with innocent black eyes, twitchy noses. A group of them together is called a fluffle. How cute is that?

But when you turn on the television, they become sarcastic nuisances to society whose sole purpose is to torture humanity. For decades, rabbits have been a sting in many people’s behinds. Sneaking into gardens, outsmarting hunters and grumpy ducks, they steal, defecate Coco Puff looking balls everywhere, they disrupt order, and, in some cases, take on more sinister roles that might cause nightmares. Have you ever seen Monty Python and The Holy Grail?

Why is this? In over 50 films, rabbits are forced into the role of the antagonist or irritating sidekick. Yes, at times the rabbit itself can take the title of the ultimate irritation since their only goals in life are to eat, hop and reproduce. But I hardly think that could cause such a harsh portrayal in film: goats eat more, fleas also hop, and rats are much more procreative.

So why rabbits? Sweet looking fluff balls that don’t appear to shine in the intelligence department and are prey animals. No one who watched Bugs ever wondered why he was such a jerk, it was just the way he was, but it’s always bothered me. Not just Bugs, but all cinematic rabbits have been pigeonholed as sass hats. Lions and tigers and bears (oh my) are large, majestic and ferocious. Dogs are man’s best friend, cats have the perfect villainous stare, bats are mini vampires and wolves thrive in mythology, but rabbits? Unless used for a wolf dinner scene or to frighten an adulterous man like in Fatal Attraction, why are they so popular?

Bugs Bunny, the king of cinematic rabbits, first appeared as a neurotic maniac on a sugar rush, then finally mellowed out years later into a sarcastic trickster. Peter Rabbit, the rabbit with a blue jacket and no pants, plainly tries to murder Mr. McGregor in the new 2018 movie in such a way that is impossible not to laugh. Snowball, from The Secret Life of Pets, is an insane escape artist, and I mean incredibly insane.

All these rabbits are funny to watch but when stripped of humor, they symbolize a tenacious existence using the typical “meek victim is secretly a force to be reckoned with” trope. How many people have chased a rabbit for one reason or another? Your child’s pet got out and you had to chase it around the house, crawling under the bed coaxing it out with food while it watched wide-eyed until nipping your finger and hopping away. Many of us know what Elmer Fudd felt.

Despite their innocent appearance, rabbits are not as loving or adorable as they seem, but instead, live in a harsh reality. Mother rabbits are tough towards their young and will leave their babies unattended for long periods of time without feeding. The seemingly cold act of motherless love is meant to keep from attracting predators and is also used as a child rendering technique.

However, as many learned to their horror around middle school, probably thanks to some smart-mouthed boys, some rabbit mothers eat their young. The concept sounds horrific, but for the rabbit’s practical and sensible side, rabbit mothers don’t have the same maternal instinct as other mammals. They sometimes prefer to kill off their young or abandon them completely instead of raising what they don’t want or aren’t prepared to care for. The innocent but aggressive world of rabbits probably serves as a large basis for the personality of some famous ones.

As it turns out, the origins of the cruel rabbit go all the way back to Medieval times. During the Middle Ages, the image of the rabbit symbolized innocence, purity and helplessness, and later fertility. There are many images in the 10th and 11th century using rabbits to show such themes, but then multiple artists started painting them as revenge seekers going after hunters in humorous and rather violent ways.

The artwork speaks a message of retaking what the vulnerable have lost. The meek shall inherit the Earth. Images of rabbits beating humans, tying them up, shooting them with arrows and outsmarting hunters, are all scenes that remind me a great deal of Bugs Bunny. Rabbits, in some cultures, are also a symbol of the Earth, which gives the illustrations an angry Mother Earth sensation.

Modern films have not shied away from expanding this, using them as a metaphor for the weakling or underdog that is just as intelligent and strong-willed as a predator. A less violent one in modern film is Judy Hopps from Zootopia. She’s a tiny and cute bunny who hates being called cute, and who decides she wants to be a cop even though there has never been a bunny cop in history. They tell her she can’t do it, that she is small and nothing but a “dumb bunny,” but she proves to be a relentless match for any criminal.

The 2001 film Donnie Darko has another implacable rabbit that is actually a man named Frank in a rabbit suit. (Spoiler alert for anyone who never saw Donnie Darko.) Frank is a member of the manipulated dead, murdered by Donnie himself for his part in a tragic accident. Even though Frank’s goal is to prevent destruction by changing the universe’s timeline, the outcome is a reverse occurrence where he is alive, and Donnie is the one dead. Frank symbolizes a loss of innocence, the power of it and the corruption it can bring.

We see this theme in typical horror films as well, where particularly violent rabbits sometimes show up. The victims are usually sweet young women enabled with outsmarting the monster at the end, ie rabbits who outsmart the wolf. The 2015 film, The Witch, has the Devil and his consorts on earth corrupting a simple Puritan family, and with them are two animals associated with evil, a goat, and a rabbit.

Rabbits never could catch a break; during the times of Salem, they had a rather poor reputation as being signs of witchcraft, serving as witches’ familiars and messengers and credited with being the form into which most witches transformed.

Witches and rabbits are both subjects of magic and femininity and are both popular among the hunted. Rabbits are at the bottom of the animal hierarchy, basically fed on by all predators. Their survival depends on their creativity and on their tricky ability to hide in plain sight. Movies are all about magic, movie magic, and they love metaphors. What better animal than a rabbit? Going from symbols of innocence to magic to unpredictable cunningness used to conceal a deep strength within. They are the perfect movie animal.

Some of the best family-friendly rabbit movies are:

Some not so family-friendly movies: 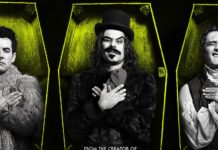 What We Do In The Shadows — Movie Review